Research in Quantum Computing is making rapid progress – but is a new era approaching?

It is an incredibly exciting time to be involved in the field of Quantum Computing. Quantum Computing has been described as the major technology innovation that will revolutionise the world of computer science. Leveraging the principles of quantum mechanics – using qubits, superposition, entanglement — to deliver exponentially improved computing power opens the door for breakthrough applications in areas as diverse as cryptography, deep learning, and quantum chemistry.

Research progress in quantum computing has been significant, most dramatically demonstrated in the increase in the number of qubits on a single quantum chip research teams have developed. For instance, in 2016, the highest number of qubits on a quantum chip was less than 10 qubits; but companies such as Intel, Google and IBM have announced chips containing significantly higher (in the range of 50 – 72 qubits).

This research progress has been accompanied by significant investment, both in the private and public sectors. For instance, the EU in October 2018 announced the first recipients of their €1 billion Quantum Technologies Flagship fund supporting quantum investment; and the US have announced similar levels of government funding.  In the private sector, leading companies such as Airbus, Lockheed Martin, JP Morgan, are collaborating with quantum technology firms to investigate potential use cases.

Finally, more recently it has been claimed that not only does the technology have great promise, but it also appears that a breakthrough is imminent. In Sep 2019, Google has reportedly achieved ‘Quantum Supremacy’: demonstrating for the first time that a quantum computer is capable of performing a task beyond the reach of even the most powerful conventional supercomputer. This result however is still being peer reviewed prior to formal publication, so the scientific world awaits before giving its formal verdict.

So — with the lightening pace of research in this area, the significant investment and corporate support and impending milestones seemingly achievable — does this mean that we are close to entering the era of Quantum Computing? 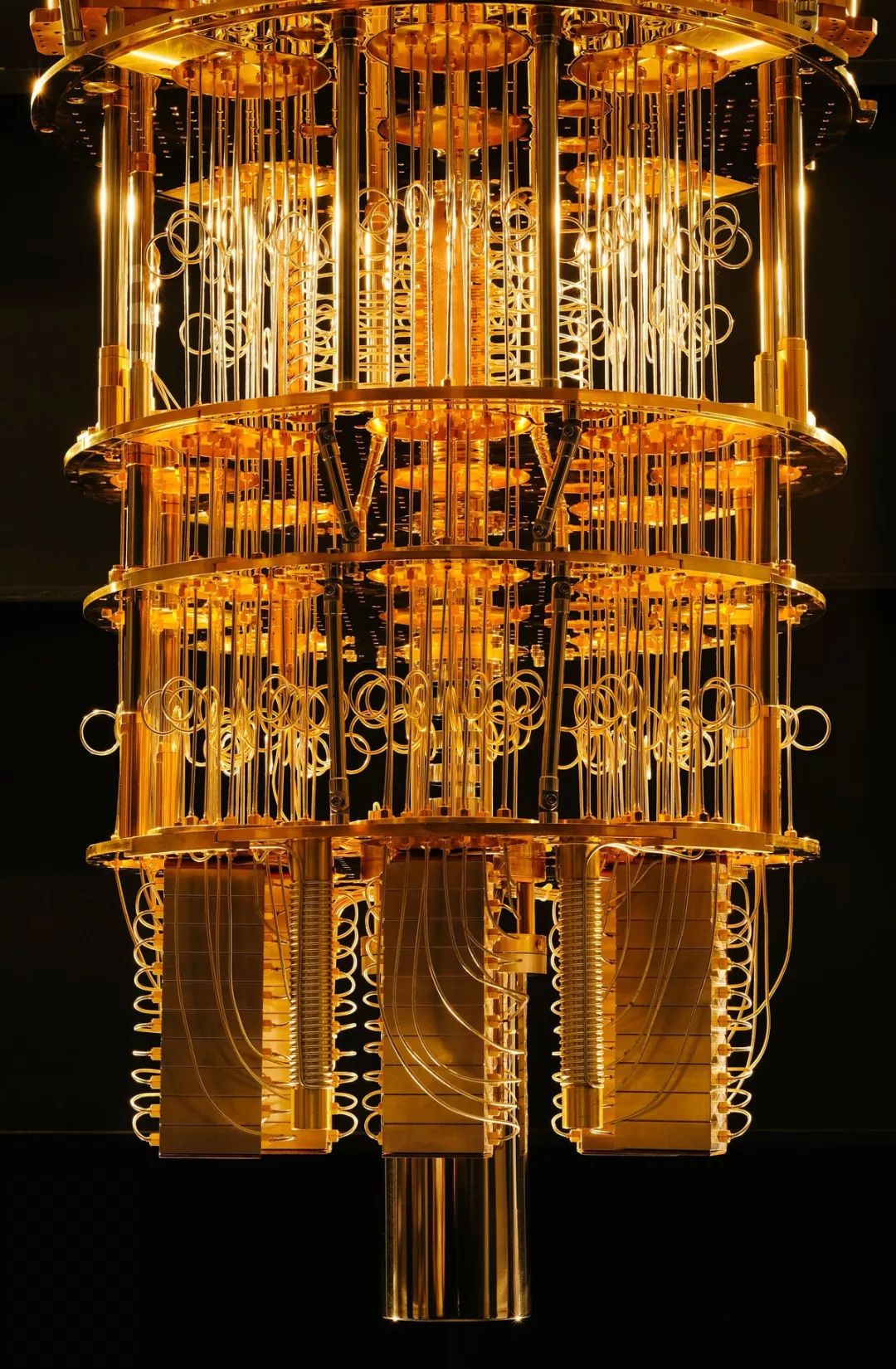 Quantum Supremacy is an important milestone — but it won't lead to near term practical applications.

The achievement of Quantum Supremacy is regarded by many as an early pre-requisite step for entering this Quantum Computing era. But what exactly does this milestone of Quantum Supremacy signify? It refers to the point at which it is demonstrated that a quantum computer can perform a particular computational task that a classical computer would be unable to perform. Note though that the task itself needn't be necessarily a useful one, and in fact achieving Quantum Supremacy would have limited immediate practical applications.

The Google team considered most advanced in the quest for Quantum Supremacy have proposed that the task used to demonstrate quantum supremacy is 'random quantum circuit sampling'. A quantum circuit can be considered to be a certain set of operations performed (via quantum gates) on a base set of qubits; and to model the output of such a quantum circuit with a classical computer would require exponentially increasing computing power and at a point become infeasible.

It is argued that the current size of a quantum computer that would surpass a classical computer capability to simulate it is about 50 – 100 qubits, using a quantum circuit with 10 quantum gates (i.e. a 'depth' of 10) and a sufficient low error rate for these quantum gates. Given current experimental levels and progress, the quantum supremacy milestone indeed seems achievable in the near short term.

Achieving this milestone would be significant from a research perspective. Firstly, it would demonstrate that quantum computing is real & practical – it is not purely a theoretical concept but it is possible to build actual physical quantum machines. It would also provide an early indication of which quantum hardware approach might be the most scalable and robust. Secondly, it would have a huge impact on theoretical computer science by overturning one of its core principles – the 'extended Church Turing thesis'  that says any computational task can be effectively simulated on a classical computer (or Turing Machine). For the first time, we would have experimentally demonstrated that the limits of classical computing are not the limits of actual computing.

So we might consider Quantum Supremacy as an early first step into the Quantum Computing era.

What then is the key engineering challenge left in reaching Quantum Supremacy? While the number of physical qubits on a quantum chip will obviously need to be of a certain size to achieve Quantum Supremacy, the important additional factor is that the quality of these qubits must be sufficiently high.

To illustrate this, we can distinguish between a 'logical qubit' and a 'physical qubit'.

A logical qubit is a theoretical concept – a unit of information storage in a quantum computer that can be manipulated according to the rules of quantum mechanics (e.g. entanglement with other qubits, superposition of different quantum states, exponential ability to store information).

However, real physical qubits (such as a trapped ion, or an electron spin) are impacted by real world challenges such as external interference that introduce errors into calculations, and mean the physical qubits are poor approximations of genuine quantum logical qubits. In order to manage these errors currently, significant numbers of additional physical qubits are required to run error correction code (e.g. through techniques such as the use of 'surface code').

One particular source of error is the gate fidelity - the accuracy with which we can perform quantum gate operations (i.e. well-controlled entangling operations acting on pairs of qubits); these operations still have significantly higher error rates than classical computing gates. Currently the best error rate per gate (in trapped ion or superconducting circuits) for two-qubit gates is about 0.1% (i.e. an error every 1000 operations) and the more physical qubits on a chip the harder to sustain this level.

With error rates such as these, Prof John Preskill from Caltech has argued that we are now entering the era of NISQ (Noisy Intermediate Scale Qubits) – an era of intermediate scale of quantum computers (of c. 50 to a few hundred physical qubits) that will continue to be 'noisy' i.e. the quality of qubits will be relatively low. This contrasts with the longer-term goal of developing Fault Tolerant Quantum Computers – where errors generated can be suppressed to arbitrarily low levels, and quantum devices with a significant number of  'logical qubits' can be developed.

The applications of Quantum Computing will be in areas that require complex modelling of quantum systems, because 'nature isn't classical, dammit'.

One of the most powerful applications for Quantum Computers (both in the NISQ era and onwards into the era of fault tolerant quantum computing) will likely be in areas that require modelling of quantum mechanical effects in the real world. Richard Feynman, the American theoretical physicist known as the father of Quantum Computing explained this by saying: 'nature isn't classical, dammit, and if you want to make a simulation of nature, you'd better make it quantum mechanical'.  So where can we expect quantum computers to make an impact through modelling of real world quantum systems?

The table below highlights some of the most promising areas. 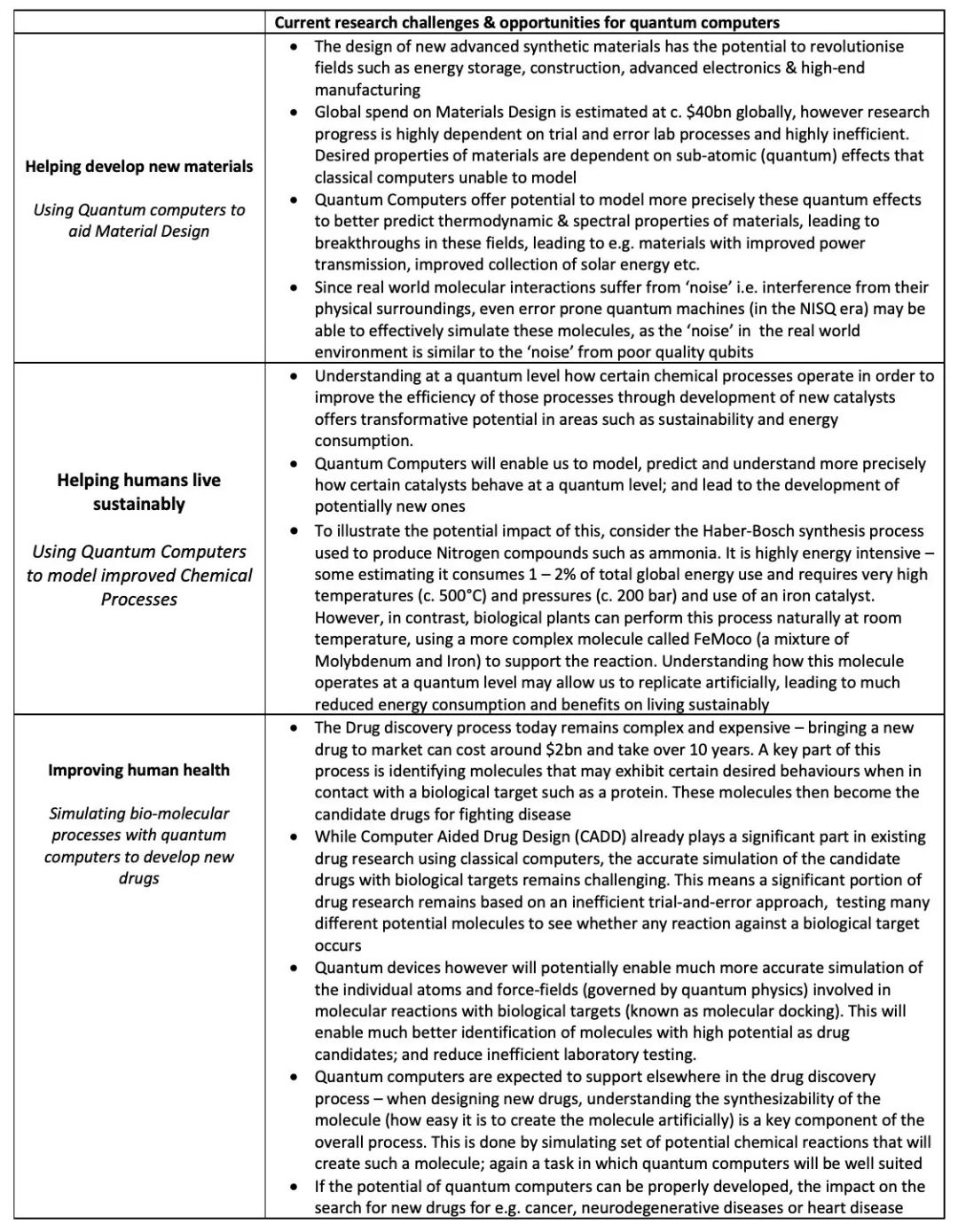 It is an exciting time for Quantum Computing.

With the rapid progress of different research and engineering teams around the globe, supported by significant public and private investments, some of the early milestones on the overall journey - such as Quantum Supremacy – are likely to be reached soon. These milestones will signify that we are entering an early era of Quantum Computing – the NISQ era in which quantum devices of fifty to several hundred 'noisy' qubits will start to be developed and applied in early use cases.

Some of the most exciting eventual applications for Quantum Computing will be in helping us simulate and understand more precisely quantum effects in the real world, in areas such as materials design and drug discovery. While most researchers believe that the full benefit in such areas won't be unlocked until we develop Fault Tolerant Quantum Computing, there is some optimism that even with NISQ devices, we can start to gain some of the early insight, learnings and see some practical applications.

So – the Quantum Computing era is nearly here. The journey from today's research to working NISQ machines to fully Fault Tolerant quantum machines will be a long term process – but it is time to start getting ready for it!

Dr Ling Ge is Chief European Representative at Tencent. She leads the company’s efforts in Europe, focusing on strategic investment and partnerships with technology startups, universities, government and industry around Europe. Ling received her doctorate in Quantum Computing at Oxford University, following which she became a Leverhulme Fellow and held various leadership roles at Imperial College London. She also serves as a board director / advisory board member for several venture capital and technology firms, providing expertise on areas such as AI, quantum computing and education.